The House at Review Corner: Magic Bullets – Or, How to Become a Skeezy Pick-up Artist without actually using the term

As many of my stories tend to begin, I was browsing the internet one night . . . and came across an online set of discussion boards called The Attraction Forums. The top post on there was from a guy opining his issues with women, but it took me a minute to figure this out, as he was using all of these odd word choices, such as “opening,” “closing,” “transitioning.” It sounded like a corporate merger rather than an attempt to get off with a chick. As I continued to scroll, I encountered a lot more of this type of coded language, as well as acronyms I certainly had never seen before.

Enter the world of men’s self-help.

Of course, they will never, EVER call it that, because then it brings it to a woman’s level, and we can’t have that. No, call it a “system,” call it a “model,” but don’t EVER call it self-help. And be sure to include all of this ridiculous acronyms and code-words, so all the dudebros can feel like they’re in this secret frat.

There are so many of these – Love Systems, Mystery Method, Bad Boy Something-or-Other, The Game – but they all have one thing in common: they promise that, if you use their system, and retrain your brain to think in their ways, you will be swimming in tail. Even if you’re not all that hot! (I’ve looked at some of these “gurus” and “masters” online. Some of them are not that hot, but supposedly, they can get any lady they want).

My curiosity was piqued, so I managed to track down a copy of the book. What are guys telling guys about how to pick up women? They claim that they can’t ask women, because, damn it to hell, we don’t know WHAT we want!! Because of course, we’re all the same, and have teensy brains that get exhausted easily.

I honestly was surprised to find a section on “relationships” in this book. Of course, that could also be taken to mean “friends with benefits,” but in the main, this book has one endgame: sex. As a matter of fact, they encourage men to bone the ladies BEFORE pursuing any type of relationship with them.
END_OF_DOCUMENT_TOKEN_TO_BE_REPLACED

I can’t believe it’s been over a month since we last visited with each other, dear reader. Especially since I found the following gem RIGHT AFTER reading Garden of Shadows.

“He Suspected the Worst,” from Volume 2 of All Romances. The year is 1949, and this is the second story in the magazine.

We open with a girl standing on a broken bridge, rescued by a handsome youth with an unfortunate-looking jacket. Once on safer ground, the girl introduces herself in an odd way:

Not, “Hi, I’m your step-sister, Leslie?” Not that it matters, as our young man is suddenly obnoxious, calling Leslie’s mother a gold-digger, but not exactly in those terms.  “Uncle Jim,” as Leslie calls him, is determined for the two young people to be friends.

Ross is being a bit intimate with his second cousin, Mavis, when he discovers Leslie kind of spying on them. Then this happens:

“I also forgot that Ross was my STEP-BROTHER.”

Ross decides to leave and head for New York, because he knows where he’s not wanted; he’s going to go with Mavis and Friends to the West Indies, because that’s where winners and not-gold-diggers go! (And this time, he actually does say “gold-digger.”)

Leslie is sad that Ross is going away, because feelings, I guess. And then “Uncle” Jim makes up his will, but her mother and Leslie are not privy to his decisions.

Jim kicks the bucket soon enough, and Ross is all “I’m’a kick you outta this house because I’m the king now” or some shit, but in reality, Jim left everything but $10k to his wifey. Ross also has to stay at the house for the next two years if he wants the dough to which he is entitled. This doesn’t sound like a lot, but according to the inflation calculator (love that thing, especially when looking at old prices in magazines), it’s equivalent to ~$100k today. Cha-ching! Of course, Ross doesn’t believe that his step-family were ignorant of the changes to the will, so he is pouty and goes to his rooms.

He starts insulting Leslie about the gardening, and then Mavis shows up again. Mavis essentially invites herself to the house, and then is insolent and lazy, not to mention a bitch. Ross piles on about the girls duping his father out of his money, and maybe even murdering him. After the spat, Ross leaves and then Mavis goes out for a walk. Down by the water, where the suspension bridge is out!

Mavis is in trouble and Ross dives right in to save her, which nearly kills the both of them. Until Leslie and her canoe save the day.

So, is Mavis grateful when she comes to? Of course not! She tries to spin another story, this time about Leslie trying to kill her. Ross has finally had enough of it, but before he can say anything else, Leslie faints from all of the exertion.

And now, for the squicky conclusion! 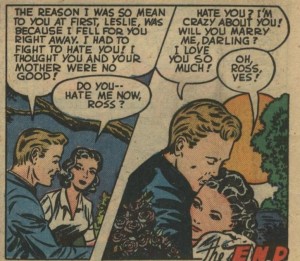 Ladies, if the man you love is a close relation, SHUT IT DOWN.